William’s journey home as a PoW finds him celebrating VE Day at Pardubice. 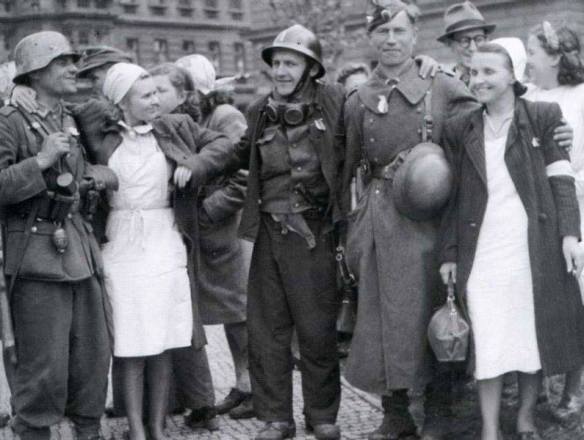 William had arrived at Pardubice. The British were hailed as Heros by the crowds.  A captain in the Czech Army stepped out to introduce himself and a woman who he said would look after us.  Her name was Anna; she spoke passable English saying that her husband had been a member of the local underground Resistance and had been killed by the Nazis during a raid on a petrol dump in July 1944.  Anna told him that there was going to be a ceremony in Pardubice’s main square that afternoon in honour of the British soldiers.   Anna also said that she had heard that the trains had stopped running from Pardubice to Prague, but that she would try to drive us there this evening as she had Resistance friends and colleagues in the capital who would help us get to the Americans.

It was late in the morning when we squeezed back into Anna’s little car and drove back towards the center of the town. Leaving the suburbs we made our way into the old town as Anna said that the ceremony was going to be held in the square outside the town hall. We parked the car just a sort walk from the square and joined the crowds laughing, shouting and singing as they made their way along streets and alleyways leading to the town hall. People had draped coloured blankets, flags – I could make out Czechoslovakian, English and even a French one, from balconies high up above the street and I could hear car horns blaring and music coming from shops, flats and houses as we passed. Their joy was intoxicating, it was as if a cork had been pulled out of a bottle, all the unspeakable brutality, crippling hardship and sorrow of the last six years was forgotten for a moment by the euphoric realisation of peace.

Eventually, with hundreds of other people, accepting beer and wine from strangers and kisses from almost every woman and girl we passed, we arrived in the large imposing square. A platform had been set up in front of the grand steps leading up to the town hall and more flags adorned the imposing buildings that flanked the square. I don’t know how many people there were crammed into the square by the time we arrived but, as soon as they saw Fred and I, we were pushed through the throng to stand with the rest of the British prisoners in front of the platform that was draped with Czech and British flags.

There was a brass band belting out patriotic tunes in front of the main doors of the town hall and, standing on the platform behind a table on which rested a microphone, was, I presumed, the mayor of Pardubice in all his finery, various civic dignitaries and one of our sergeant majors, a Durham Light infantryman called Bill. The noise from the crowd was deafening, but after a while, the mayor held up his hands for silence and turning round, signalled to the bandmaster.

You could have heard a pin drop as the band played God save the King. Many times over the last five years I’d wondered if I was ever going to hear our national anthem again – I know I wasn’t the only one, but to hear it, played now that we were free again was overwhelming. I wept, unashamedly. The band then played, I presumed, the Czech national anthem and now everyone, including the mayor was crying. When the last bars of the music died away we all stood there in total silence lost in our own thoughts – then the crowd went mad again.

The mayor waved for silence and then made a rousing and quite long speech, his voice booming out of the loudspeakers positioned high up around the square. I, like the rest of the British, had difficulty in understanding what he actually said, although the sentiment was obvious. When he stopped speaking the cheering and shouting went on for ages. Eventually the mayor waved his arms again for silence and, as the noise slowly died away, Bill said his piece. He said how proud we were to be able to share this momentous occasion with the town and how touched and grateful we were for all the warm hospitality we had been shown – it was a special bond. I don’t know how many of the townsfolk understood Bill with his broad Durham accent, but it didn’t matter a jot – they listened in silence and as soon as his last words died away the party really started. The band were playing, people were singing, dancing, kissing, climbing lampposts, waving flags and swigging bottles of various alcoholic brews. Fred and I were swept into the crowd and it was difficult to keep sight of Anna, but at about five o’clock, she grabbed me and said that we must leave the party if we were to get to Prague tonight.

We were all sad to leave as we had never had an experience like it – it was such an outpouring of unashamed joy, relief and renewed hope after all we had been through that we wanted to enjoy it for as long as we could. It made me even more determined to get back to my family as quickly as possible – and that, for me, meant reaching the Americans. As we were leaving the square I shouted to Fred and asked him if he still wanted to come with me to Prague or stay here, finish the party and wait for the Russians. He didn’t hesitate.

“We’ve come this bloody far, I want to get back to Blighty as soon as I can – it’s got to be the Americans – let’s go.”

Buy the book on Amazon

A visual summary of William’s story as a WW2 soldier produced as our new Book Trailer.

William’s arrival back to the UK:

‘I stared at the White Cliffs of Dover with a numbness, lost in my own thoughts.  I was finding it difficult to comprehend that my journey was almost over’.

We are pleased to present the NEW PRINT EDITION of The Lucky Shilling! 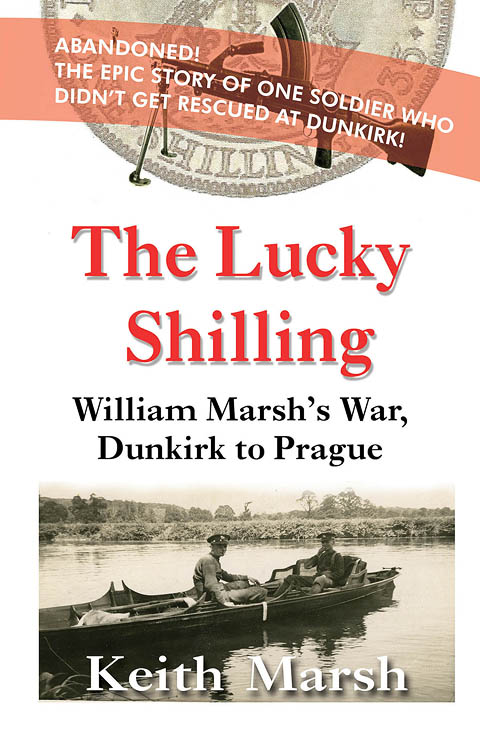